In addition to the Lovely Bones, this is another new film I'm adding to my "must see list":

My friend the rugby player passed this along. Hopefully, the film does history justice.

Today's Bust of a Halloween Show

I used to l-o-v-e the Today Show's annual Halloween show! They'd have creative costumes, all kept secret from one another to add to the buzz (except Matt and Al, who were usually a team). We've seen them as J.Lo and P-Diddy, and then as Simon and Garfunkel and Oprah and Paris Hilton. Katie flew in one year as Peter Pan (almost knocking an innocent bystander in head, but that's neither here nor there), and Anne made a lovely Audrey Hepburn. You can take a look back here.

In the past couple of years, though, I've been really disappointed in the costumes. It's like they are trying too hard to make everyone come together under on theme, which never works. This year, they all dressed up as characters from Star Wars. It was painful to watch, and the whole schtick was more about the authentic Star Wars items on loan from Lucas Films than it was about the hosts in costume.

Visit msnbc.com for Breaking News, World News, and News about the Economy

My advice: Quit phoning it in. If you don't want to do the costumes anymore, don't do it. Find another way to celebrate, but please quit dragging out these lame attempts!

Some Closure, I Suppose

Back in 2002, the D.C. area was terrorized by two crazy people who were randomly killing people. At the time, it was thought that it was one killer, dubbed the "sniper", who was driving around in a white van targeting people for no reason. Victims were being shot as they pumped gas, walked along the roadway and sat on benches. It was really scary! It seemed like every night I'd turn on the TV and the sniper would have struck again. He was hitting his victims from a distance, so people had no clue if someone was watching them from afar, just waiting to shoot.

It turns out the white van was a myth, and one night we turned on the TV to find coverage of a backyard in Washington State being dug up as part of the investigation. A suspect was in mind, and now the job was to find him. Then, just as suddenly as it started, the sniper was caught by an observant truck driver who spotted the suspected vehicle in a rest area parking lot.

The sniper turned out to be a team of two -- one man, and a teenage boy he'd taken under his wing. They were tried and convicted in both Maryland and Virginia, ensuring that any legal loopholes that could get them off the hook were essentially closed.

I explain all of this to share the news that John Allen Muhammad -- the mastermind and adult male sniper -- is set to be put to death by lethal injection on November 10. When I first heard the news, it almost took my breath away.

To be honest, I don't know why. Maybe it's because every time I pumped gas, I held my breath. I'd be nervous walking out to my car at the mall, wondering if the sniper was nearby. My heart would beat faster when I'd turn on the news and see another shooting. I guess it was just natural that the news of his execution give me the same reaction. 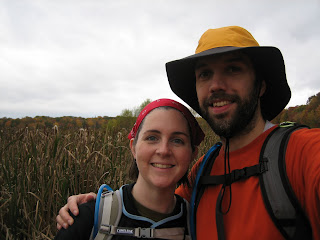 We headed out early this morning for a five-mile hike in a nature preserve near Alexandria. The weatherman was calling for "soaking rain" in the afternoon, so we got up and out so we'd beat the rain and enjoy the hike.

The first part of it was on a boardwalk-type walkway that ran for about 3/4 mile, right through the wetland/nature area of the park. We were surprised to pull in the parking lot and see so many cars that early, but quickly realized that this wetland area of the park was filled with photographers trying to capture the perfect shot.

This is what I've learned about these geocaching hikes with Rob -- even if he says we'll be on the trails, we won't be on the trails. I'm not sure why it's taken so long for this to sink in, but today it was hammered home. We bushwacked our way through quite a bit, including some waist-high growth that was pretty tough! We eventually made it back to the trails as we hiked back towards the car.

It did rain on us a little bit, but we were lucky to miss most of the down pour that came later this afternoon. We spent the rest of the day napping, watching football, eating pizza and trying the Ciao Bella Blackerry Cabernet Sorbet - yum!

I've been reading some good books lately, so I thought I'd pass some recommendations on to you....

Still Alice by Lisa Genova. This is the story of a woman with early onset Alzheimer's, and it's really a wonderfully written novel. It's sad and sweet and very, very touching. And now I've convinced myself that I probably have it too. ;)

The Weight of Silence by Heather Gudenkauf. I seriously could not put down this tale of two missing girls, family secrets and tragedy. It wasn't a mystery novel, but it was a real page-turner.

Happens Every Day by Isabel Gillies. This is an autobiography about a real woman who gives up her life to follow her husband's career.... up until the minute he decides he doesn't want to be married anymore. It's a fast read.

I'm on the waiting list at the library for The Help by Kathryn Stockett, and I have This is Where I Leave You by Jonathan Tropper, although I haven't started it yet. Any other suggestions from you??

I flew home yesterday from five days in Chicago for a work conference my association hosted. Those days are looooooong days -- down to the staff office or prepping for the breakfast sessions by 6 a.m., and not back to my room until 10 p.m. or later. It's really exhausting!

The conference went well, the sessions I was responsible for running went smoothly and we managed to have a little bit of fun -- and a lot of good food. :) Dinners at N9NE, Gibson's and Volare were good treats and enjoyable time away from the madness of the meeting.

Unfortunately, I didn't get out of the hotel much more, so I wasn't able to see as much in Chicago as I wanted. Plans to walk to Millennium Park were canceled due to rain, but I did manage to get down Michigan Ave for some window shopping on my first day in town.

It's pouring rain here, but Rob decided to head out to do some geocaching this morning. After pancakes, he took off and I hit the market, Costco and Home Depot. I started today on the guest bath upstairs -- peeled all of the wallpaper border and plan to paint it a soft cream color. I've already picked out a new shower curtain and am ready to get it finished, so we can put it to good use when I start our master bath renovation.

Tomorrow after church, we are going to brunch and then taking a fall baking class at Williams Sonoma. I'm looking forward to it!

Hope you are having a nice weekend. To come, the recipe for the yummy corn chowder I made for dinner tonight.

As an avid People magazine reader and a longtime subscriber, I'm happy to celebrate the 35th anniversary of my favorite magazine.

People has launched a cool interactive on their Web site: 1974 to Now: People's Biggest Stories.

You can see the layouts, see the photos and read the actual articles from the archives. Very cool way to look back at great pop history, mixed in with political news and famous faces.

I am the Matron of Honor (doesn't matron sound sooooooo old??) in a wedding this November, so I have the honor of making a toast to the bride and groom.

Do you have any tips? Any good dos or don'ts? Heard any good toasts I could poach? (kidding!)

At our wedding, Tessa's (the MoH) toast was sweet, and Dave's (the BM) toast was funny. Can I be a little entertaining??

Not to be confused with Zesty Chicken Enchiladas or Zesty BBQ Chicken, here's yet another tasty and easy "zesty" recipe!

All the Pieces Coming Together

I'll admit that when I first met you, I didn't like you. I thought you were snippy and a little mean to poor Jon. After all, you were both working hard to raise your slew of children, and he seemed to bear the brunt of your exhaustion. What did he do to deserve it?

Now, after all that we've seen on TV and read in People magazine, I get it.

You really were living with nine children.

Doesn't Jon realize that your children -- thanks to the wonders of the Internet -- will see and read every little sordid detail of your marriage's demise? They'll see him say that he "lost his twenties" to his kids, and they'll see him sucking face with every 22 year old who he meets on the street.

You still may be a nut, and your kids definitely need some counseling and time away from the cameras, but now I get it. Jon is an idiot.

P.S. - In case you haven't seen Nancy Grace put Jon in his place, you can see it here:

I've been a bad blogger lately! Work has been crazy as we prepare for a conference, and it seems like every evening has been busy with one thing or another.

Last weekend, I boarded a bus with my mom and 34 other ladies for a road trip to the Longaberger Homestead. I hadn't been there in almost 10 years, and the trip was great! We'd not been on a bus trip before, and I think we both liked it (no driving, hotel and other arrangements made for us, etc.).

Longaberger has opened a Factory Outlet where they have extras from special baskets, heaps of liners and pottery, etc. They also had a "second quality" section, and I got a couple of baskets there at a great discount. Some of the baskets in that section are really screwy, but we dug through them and found some that have defects that are barely noticeable (example: I got a giant blanket basket that has a little bit of uneven stain on the a couple of the basket splints -- who'll notice that?).

Tonight I organized my new baskets and got everything put away. Thanks, Mom, for a very fun weekend! 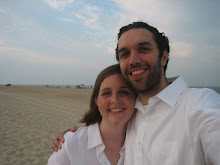